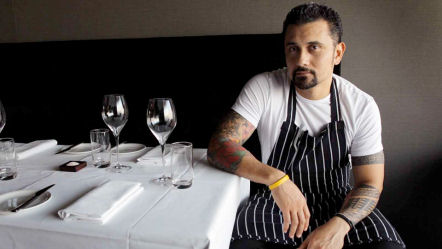 Michael Meredith is one of NZ most creative chefs, and owner of elite-degustation restaurant Merediths.
Michael ,who is Samoan born, has earned his stellar reputation following the award of a scholarship to the Culinary Institute of America-spending time in New York, Melbourne, Sydney and Auckland’s best and ultimately by opening his own restaurant Merediths in 2007.

Chef Meredith has a unique style and a reputation as a conjurer of flavour and texture. He believes there innovation in simplicity – the innovation is to transform a seasonal ingredient, so it creates a cuisine that is simple and pure. Meredith is one New Zealand’s best known chef’s, with a number of international workshops and presentations to date.

Featured in numerous magazines articles and food blogs, the humble Meredith has earned his reputation throughout the Pacific as an exceptional talent and continues to rise as an important contributor to New Zealand cuisine.